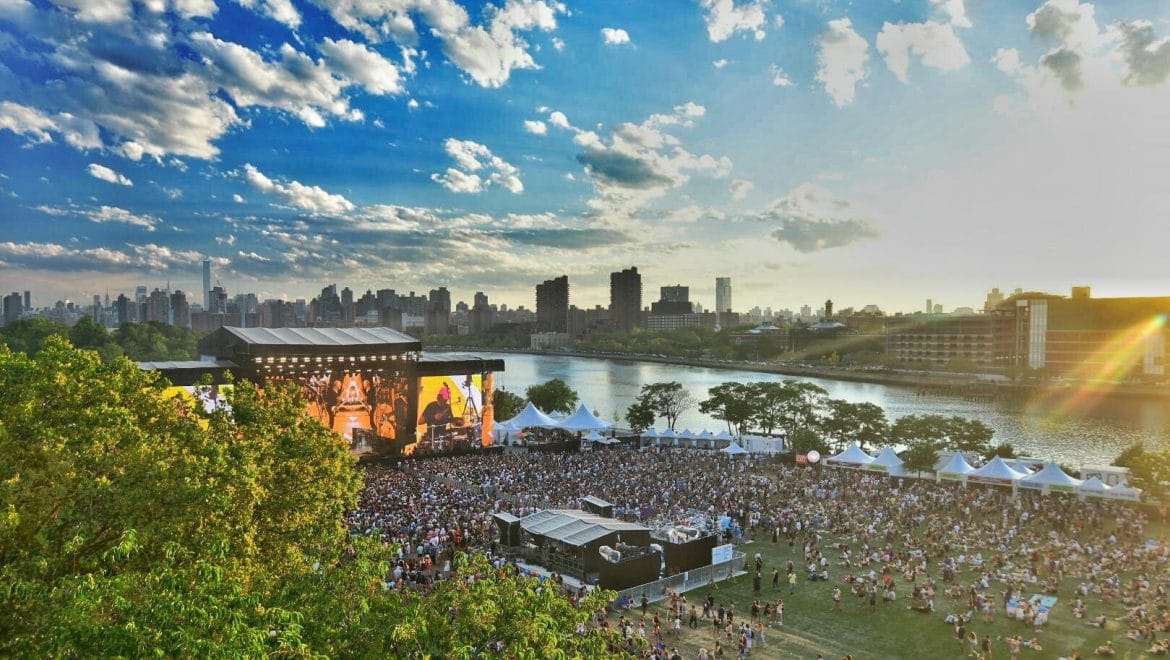 It’s the type of day where heat can make the moment feel like molasses, movement yes, but at a fraction of the pace. All the better to watch the world spin slowly enough to pick up the extra detail; particulate and dust picking up off the pavement, sweeping clouds that dissolve into soft fractals and finally, nothing at all. One of those sprawling summer days where doing nothing feels like doing something and doing something is fucking exhausting. They’ll advise you to slather yourself with SPF-something sunscreen and drink water until you can hear a healthy whooshing while you walk. But an all-inclusive media pass to Panorama Festival is more than enough to tempt the heat, it’s Sunday morning and LCD Soundsystem will be headlining the festival come 9PM…

I pile a few things into my backpack and head to Brooklyn’s central artery: The L train will deliver me to Manhattan before the day begins to peak in perfect heat, the sun burning tirelessly and strung against an arch in the sky. 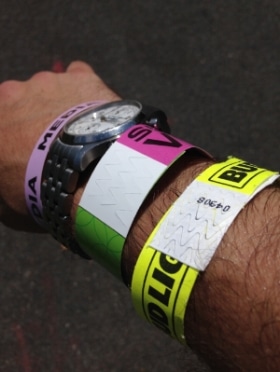 A water bottle that’s sweating profusely, a phone charger and two .45mm ink pens in case my iPhone buckles. That and a crumpled press pass with a single barcode will grant me the coveted press band, allowing me entry to most of Randall’s Island, save a few backstage loading areas. Days like this are always teeming with subject; I’ll take notes feverishly until the language starts to blur, transcribing sounds and sights with enough detail to bleed right through the page.

I’d sent and received a flurry of emails right before the festival, a regular press-clusterfuck as managers looked to lock-in performance coverage and media looked for one-on-one’s and quotes. While connecting with A$AP’s management proved futile, I was approached by EDM heavyweights Flosstradamus, but had to decline interviewing them because of a scheduling conflict. On-site, I scurry from end to end of the festival, covering Flatbush Zombies, SZA, Run The Jewels and A$AP Rocky for The Source and ducking into adjacent dance venues when there’s 15 minutes or more in-between sets. The spaced-out house rhythms of TENSNAKE and sharp synths of Holy Ghost! served as the perfect antidote to Hip Hop exhaustion (WebMD refuses to acknowledge this ailment but I’m sure it’s a real thing) while a venue named “The Parlor” was kept perpetually pitch-black with air conditioning gushing from the vents, rendering it the best place to crack into a fresh beer and recharge. Now, like anything wild and celebratory, the pinnacle of the evening loomed in the air, especially as the sun began to set and the festival hit capacity. While each act had served their purpose, many attendees, including myself, once thought they would never have the chance to see LCD Soundsystem perform again after their breakup in 2011 and farewell show at Madison Square Garden. LCD Soundsystem isn’t just a typical band, their full orchestral backing maxes out around a dozen members and includes everything from synths and a vocoder to drum machines, piano and anything else needed to deliver wave after wave of disco-punk-indie-fusion. James Murphy, co-founder of DFA Records and equal part singer-songwriter, DJ and producer, has an uncanny ability to stir the listener into the soft comfort of lyrical hypnosis. He delivers self-referential cooing that elicits a feeling of camaraderie and type of communion that makes you want to reach out and hug him personally or at the very least, flail your limbs wildly from afar. 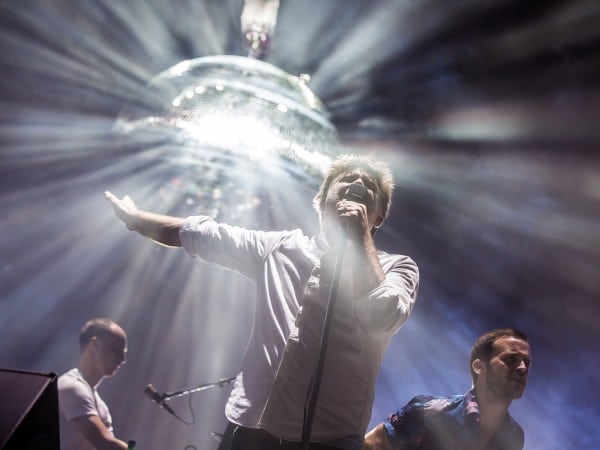 James is a special brand of bleeding heart. Maybe this can be attributed to his pudgy cheeks or a persistent stubble and frazzled look like he’s been up all night. He possesses a soft-spoken presence, apologizing for verbosity and working hurriedly to make sure he can perform all of the top tracks before the night draws to a close: “Daft Punk Is Playing At My House,” “Someone Great,” “Us v Them,” and of course, “New York, I Love You But You’re Bringing Me Down” which plays out smugly when performed against a digital cityscape backdrop, superimposed in front of actual downtown Manhattan. LCD Soundsystem’s style is perpetually climactic with long, slow builds that grow and often loop with layers of percussion. Each note is teased out and calculated, so by the time the bass drops on “Dance Yrself Clean,” 10,000 people leap into the air in unison and don’t miss a beat.

His lyrics stand as a sort of testament to everything; the good and the bad, life and death, sex and all of the times you never even came close to getting laid. The track “All My Friends” has lines that resonate much like a good film does; all of life’s tribulations and affirmations looked dead in the eye and given a fat, wet kiss:

There’s nostalgia in just about everything James Murphy writes, pinpointing the most ephemeral sensations and stirring them into anthems to belt out against the night sky. It’s the feeling of getting closer while still drifting further away, of having a dream that felt way more vivid than yesterday.

In many ways, he’s an ingenious lyricist, often riffing on society with a vulnerable, almost boyish simplicity which allows him to make songs titled “North American Scum” without alienating his fans. He also manages to pierce into the heart of issues that crop up time and time again. Sadly, “Us v Them” describes dichotomy in its rawest terms, but in doing so, alludes to everything from war to common political factions and global fragmentation:

When James Murphy sings, he leans into the microphone like he’s literally pouring his heart out into it, as if his mouth were a fountain and his microphone the basin. And still somehow, by the tail end of a two-hour performance, he doesn’t look all that much more tired than when he first stepped onstage.

In many ways the work of LCD Soundsystem brings a type of high-art to the world of pop and electronica. They pose more questions than they do answers, they provoke and they reward. By the time they finally ran into curfew and cut the amplifiers, James Murphy had stirred the crowd into sweaty, collective catharsis and the closest thing I’ve experienced to a mass meditation in New York City. Sure, a meditation with booze, weed and glow sticks, but collective union all the same.

It’s only on the way home, once the music has cut out and the sound of sirens start to swell through city streets, that you feel your own nostalgia creeping in. The memory is what you’ve got now and you can’t help but wonder when you’ll feel it again.