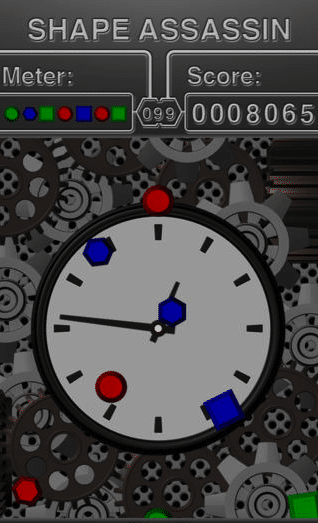 Shape Assassin is a highly ambitious strategy game that’s built for the quick and the keen. The user races against the clock to order floating shapes in hopes of solving an ever-changing puzzle and racking up the highest score possible. The process is a bit frantic, and definitely a lot of fun. For those who love puzzle games, this one is a no brainer (to download) while actually requiring some concerted brainpower to truly excel.

This game has one major mode – and that’s high score! Ultimately, the user plays one type of game, which features floating puzzle pieces of every variety and color floating toward a clicking clock. If the piece gets there before you sort it, it’ll fracture and be useless. But if you can catch up to it and fit it into your “Meter” then you’ll get a point boost. While there is only one type of gameplay, it’s still quite difficult and will have fans of the puzzle genre poking at the screen as fast as they can. After a couple of minutes, the name “Shape Assassin” really starts to make sense. 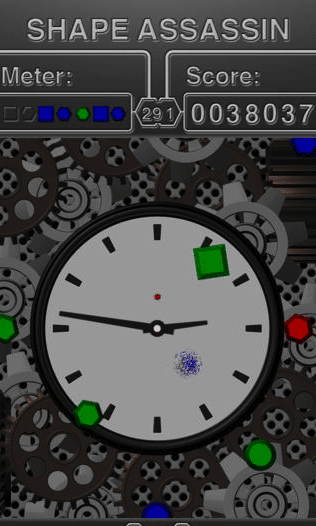 The concept here is a five out of five. The idea is original, quick, creative and generally awesome. While we’ve seen puzzle games, the premise here is brand new and the ever-changing meter makes the game infinitely fun and full of lots of variation. No matter how good you get, you’ll probably still run out of time during your run and develop some room for improvement along the way. The challenge comes when always trying to best your high-score.

While the concept is stellar, the game looses points unfortunately, because it crashes relatively frequently. Now this could just require an update and not sync properly with the latest version of iOS 7, but it severely hinders the overall fluidity of the game. Graphics are average, while gameplay is far above average. However, having the game quit automatically half the time the “help” button is pressed is a definite downside. If this game comes out with an update and starts to run a little more smoothly, we could anticipate a cult following of puzzle fanatics developing soon after.

Overall, if you love to think on your feet and like a good challenge, we can recommend that you give Shape Assassin a try. The app store is utterly saturated with puzzle games, but something about this one separates it from the pack. Probably the incessant shattering that one hears if they miss a shape and have to watch it tragically crash against the ticking clock. Or maybe it’s the vibrant shapes floating around a clock too mechanical for Dali, but surreal all the same. Either way, this game is definitely a fun one, and we recommend you give it a spin. 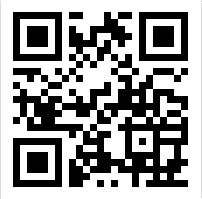