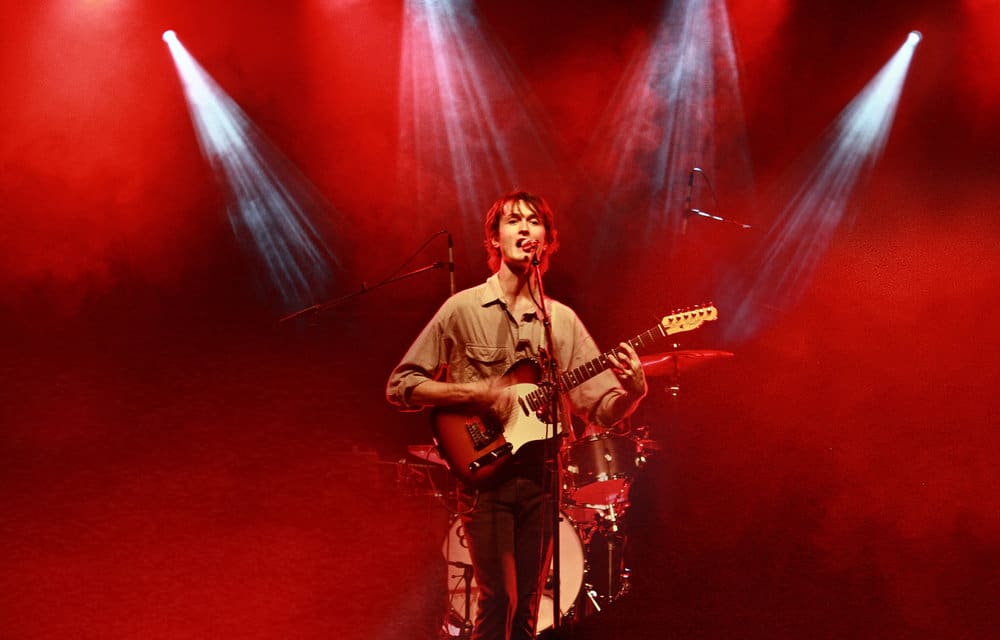 Hear me now that I am dead inside. Or so goes the opening salvo of Tim Darcy on “New Calm, Pt. 2”, a recently re-recorded track on Ought’s most recent Once More With Feeling…EP. Tim repeats the line a few more times, lightly flexing cadence as if looking in the mirror, and then launches softly into a soothing, “ba da da da da”.

Ought has been described as a “talkative brand of art-punk”, an apt-enough epithet that rests on Tim Darcy’s ever-present ability to synthesize the politically and existentially referential into rhythmic riffs and wisecracks and deliver them suavely enough to make us want more. The group is a tight-knit, New Age Montreal quartet, whose deep sense of camaraderie both on-stage and off makes the unified whole equally as intriguing as frontman Tim Darcy. A highly versatile four-piece like Ought can take a thin slice of banter, and somehow stretch it out into a six-minute post-punk think piece that’s emblematic of everything and nothing at the same fucking time. So talkative? Sure.

“New Calm, Pt. 2” is a perfect example of Ought’s acutely juxtaposed style, which sways between a subdued disaffection and an endlessly ecstatic spontaneity. This oscillation occurs between songs, but also between lyrics, causing lines like “Who invited Paul Simon? I didn’t invite him” to land alongside the far-flung, ethereal and morbid. It’s all strung on the back of a six second repeating-riff, and it works spectacularly well.

The official music video was premiered by Pitchfork last October, and is teeming with the wonderfully sardonic. A wild-eyed Tim Darcy bounces across the stage for seven manic minutes without breaking a sweat. His persistently casual delivery leads to a flood of pop-culture-prods and exquisite quips: “Hello? Oh, you’re at the door? I’ll buzz you in.” As the song runs to the point of collapse and finally concludes in metallic exhale, the genius of the video begins to sink in. It’s the movement, the noise, the quiet discontent and idiosyncrasies that make up our everyday.

I recently had the pleasure of chatting with Tim Darcy about making the “New Calm, Pt. 2” video. The song had been in my rotation for months, and I was mystified by the playful, original approach to the piece amidst a hyper-digital landscape swathed with hyperlinks and clickbait. This video stood out profoundly, and when I was introduced to Tim directly, I was inspired. 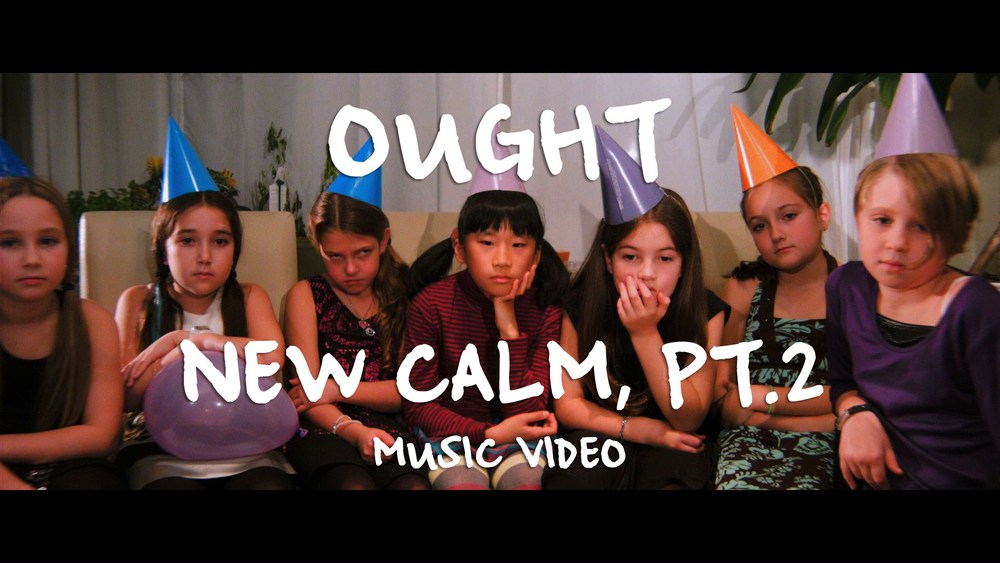 “The tension between embodying the false energy of advertising and bullshit television and peppy corporate language, while at the same time actually having catharsis.”

Adam: “New Calm, Pt. 2” was originally released on 2012’s New Calm EP. What led Ought to re-record the track for Once More With Feeling…?

Tim: We didn’t know what to expect after finishing More Than Any Other Day. We were happy with our batch of songs, but had no notions it would get the reception that it did. After the record came out and we booked a second round of touring for the fall, Don (from Constellation) floated the idea of re-recording a couple of tracks from New Calm EP, our first, self-recorded release. There are some striking differences between the versions (including a dark, groovy version of ‘Pleasant Heart’), I would recommend checking out both!

Adam: I’ve listened to “New Calm, Pt. 2” a few dozen times by now. What strikes me most is the conversational approach to songwriting, almost a two-way dialogue. What inspires that type of direction on a track?

Tim: Something very special happens when you are really comfortable within a song. I can say, with total certainty, that the more simple the song is, the more adventurous the vocals are – – whether lyrically, melody-wise, or both. It’s sort of like wandering around blindfolded in either a room that you know really well versus one you’ve never been in, or with lots of knee-height furniture. This comes eventually in other songs after we’ve played them loads, but “New Calm, Pt. 2” literally just repeats the same riff over and over and over again. There is literally a 6 second-long riff that just repeats. The guitar tabs are printed on the back of the 10″. The basic spirit of the song emerged almost immediately, but most of the ‘jokes’ were actual responses to things that went down at various points when we were playing it. “Hello? Oh, you’re at the door?” came up when our friend Jack called me during a take. The energy was really high so I just went with it. The neverending-ending came up when I got the cue wrong for signaling that I was done riffing on the vocals and we actually just kept going and going. I thought that Tim K, the drummer, was suppose to end it, he thought I was to do the same, and so we went. On and on. We were both cracking up thinking the other was an evil genius. Each feeling a bit like a hamster on a wheel. The feeling stuck.

Beyond that there is definitely a theme that comes up a lot in Ought lyrics/vocals. The tension between embodying the false energy of advertising and bullshit television and peppy corporate language, while at the same time actually having catharsis.

Adam: The video itself screams natural catharsis. It makes me want to toss over everything in my room but my speakers. Do you plot your moves in the vein of performance art, or just follow your instincts as you go?

Tim: Hey – – catharsis! A great word. A great feeling. As a band? We definitely do no plotting, it all comes out as we play together. As for as my bopping around, there definitely is an element of the theatrical about my singing/etc, but nothing I’ve sat down and premeditated beforehand. I think in either case we feel that the only way to know that you’re happy with what you’re doing is to play it out and see what happens. We only do this song live when we can find someone to guest-guitar with us, which gives a specialness.

Adam: Did you contribute to the art-direction provided by Aaliyeh Afshar and Max Taeuschel? Can you tell us a bit about the process of recording the video itself?

Tim: Yeah, I threw them a couple of ideas that had been stirring in my head with regards to the spirit of the track (like filming us in front of a mirror, so all the cameras/etc would be visible), but they 100% made it what it is. We were connected by their film teacher (who is amazing, but too expensive for us). We’ve been approached by a fair few student filmmakers/etc, but here the vibe felt really good, and they knocked it out of the park. They really captured the weird nuance of the song while still making it really fun to watch.

Adam: Anything to add before we go?

Tim: Amy, our tour manager/sound tech in the US, put this track on our pre-show playlist last year. King Curtis doing it so, so right:

Despite the whimsy of being young and on the rise, Ought strikes me as weighty, and almost expansive beyond their time. It’s the selflessly affected heart of Ought that beats unrelentingly and swells with a visceral expanse; giving us a window into our everyday life that’s a little more purposefully raw, coarse and beautiful than we’re used to.

Towards the end of “New Calm, Pt. 2”, Tim Darcy shouts in hurried breaths, “I have the microphone, but you can sing it as well!” It’s that exact sense of urgency and unity that poises Ought to make an indelible mark as one of the most stirring bands to emerge in recent memory.