A Whack, Wavy, and Wonderful Night With Tierra

It’s the morning of July 4th; a ritual celebration of American Independence even with riots in the streets and the deliberate, ever growing fissure between the haves and the have nots. A soft drizzle adorns a grey sky overhead as I make a conscious decision not to carry drugs in my backpack. Regional marijuana laws are convoluted at best and I can’t help the way my mouth curls whenever I look at cops.

At 7 AM it’s the hypnotic glow of my phone shivering into the morning; a message from a mutual friend of Josh Pan’s over Facebook. He wants to meet up in New York to discuss work and art and I bite my tongue and decide not to mention that Pan hasn’t answered an email from me in over six months. A handshake, a smile and away we go, into the breeze I guess. The future, both ahead of us and behind us and slowly pulling us forward and all the while teaching myself the mantra, “onward”, “onward”, “onward” even into, no, especially into, the unknown.

New Journalism in 2015 just means an iPhone in the pocket, memos to self and live tweeting the innermost quips of the day. Maybe overly self-referential but I’d still rather catalyze the dialogue between the self, arts, culture at large and our tendency to only portray the most polished parts of ourselves over the Internet.

My generation; millions of seemingly disparate parts yet pieces of the same machine, moving toward the same universal consciousness that maybe you’ve read about or you’ve seen more clearly as the colors and shapes pressed against the back of your eyelids before the day comes into focus.

Why observe, why participate, why write, fuck, sleep or do anything at all? I’d say, seven billion beating hearts and the breakneck speed of time and change that’s like nothing else ever-encountered in history. Here we are tucked inside of eternity: between utopia and the apocalypse rolling out in real time.

I arrive in Philadelphia early in the evening, hopping off of the train under a sputtering sky both foreign and familiar all at once, the sizzle of barbecues ever-present and burning as day turns into night. Joe and I get a bit of liquor in our stomachs and set out into the electric hum of the city to witness all things living and divine. Celebration is in the air, hoards of kids zigzagging through the street and the more or less universal consensus that tonight, sobriety is passé. The crackle of fireworks pulse against the sky in reds and hot whites, but it’s the silence in between that holds my attention.

Getting out of the cab and walking toward the water, the Benjamin Franklin Bridge sways overhead, peppered with bright red and green lights against the sky. Boarding the yacht, I immediately meet Bran, What Scene’s founder whose eyes light up with the spark of the infinitely creative visionary. Next, it’s the knowing smile of Champs, who I’ve had the pleasure of writing about before, and helped to set the night in motion with the overwhelming response to our interview. 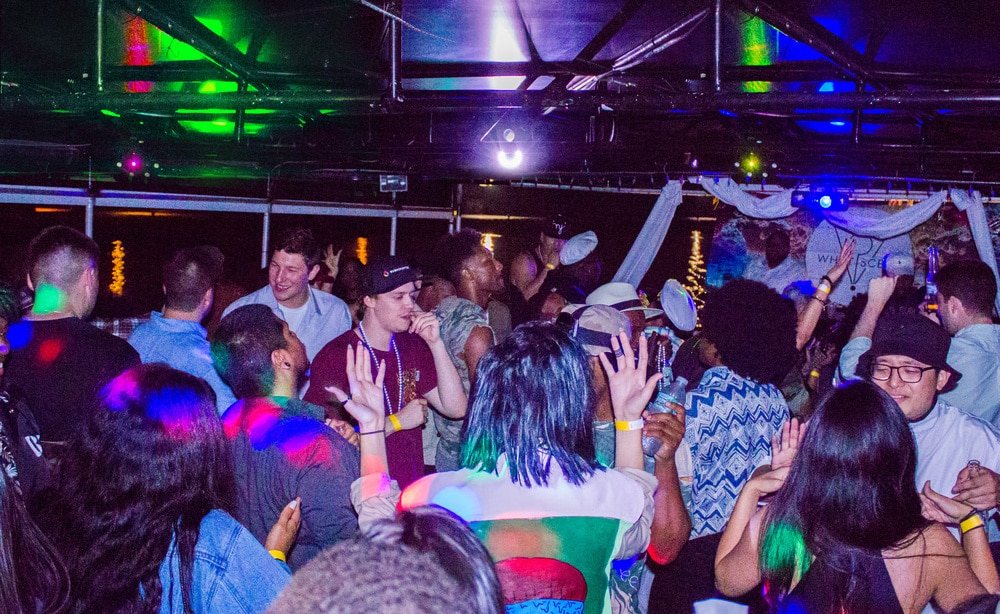 On the Yacht (not to be confused with a “pleasure” boat or other comparable floating vessel under 30 feet long), we traverse three floating stories each brimming with food, drink and an influx of passengers. The hypnotic sway of the water is rhythmic and serene as the anchors are lifted in quiet surrender. Water stirring below us and alcohol running through us, the chatter swells into ambience and we set sail into the night. Before the live performances even begin the energy itself is palpable; burning cigarettes and wide-eyed smiles as far as the eye can see.

On the top floor, the live performances begin to unfold. Our amiable host Danny Chung introduces Milton to the stage. I get as close as I can while still embracing the laziness of the nearest seat. Milton croons with heart and spirit, despite my own aversion to traditional R&B his performance resonates absolutely. It’s DJ SYLO tying sounds together behind the decks; a staple of the Philly scene known for his eclectic taste and shock of blonde hair. He’s fantastically meticulous, but readily oscillates between a feeling of authentic excitement and defaulting to the hardened look of someone who’s played one too many DJ sets.

To my delight, it’s Tierra who steals the show. As soon as she touches the microphone, she’s swarmed with concentric circles swirling around her. She struts through the noise; weighty transparent glasses atop shoulders that sway back and forth with supreme confidence. Draped in a Lazy Oaf dress that looks politely floral from a distance but actually displays eggs Sunny Side Up when up close, Tierra is much more than just Internet famous. She prefers that her listeners play a thoroughly mastered song on repeat than comb through a catalog of less than perfect tunes and regularly commits to a side of weird that’s everything but self-conscious. But the best part is, her celebrity translates with power in the flesh. She’s bold, sometimes brash, but knows that it’s better to have too much than not enough and that keeping to yourself gets very little attention. I’ve seen few performances that permeate with such absolute confidence and camaraderie. When you see Tierra Whack perform onstage you know that she’s not just personality, she’s purpose. She’ll blow up. She knows it. And she deserves it too.

After Tierra’s set it’s all last calls and drunken hoorahs as the night winds down and we dock back at the Pier. The crowd saunters off, the last of the fireworks dissipate, fizzling softly into midnight and the undoubtedly unpatriotic July 5th. The next afternoon I take a bus that hauls me four hours North of the city, far away from skylines and far away from smog. Arriving into the Mountains of Pennsylvania, I let the cold clean air swallow me up and sleep long and hard into the night.

The next morning as light breaks through my skylight, I throw on some clean clothes and head downstairs to meet my brother, who greets me with hot tea boiling on the stove. We chat and as I begin to tell him about my journey he unwraps two psychedelic chocolate truffles, peeling back tightly pressed foil to uncover a deep brown nugget that he pushes toward me with a soft smile. It takes little convincing. I take a deep breath and bring my teeth to meet it, letting the chocolate melt underneath the heat of my tongue. I sit back, reclining deeply against my chair, wondering if all the things I don’t know now, will reveal themselves in time. And it’s with that thought and the sweet aftertaste glowing against the roof of my mouth, that I begin to write.